I recently did a painting demonstration at my local Art Gallery in Mount Ommaney (Brisbane QLD Australia for those of you who have no idea where that is:) And I thought Id share  a bit of it here as people seemed quite fascinated with how I actually did the painting.  I love negative painting with watercolours, because it allows you to create depth and glow easily, and you get to build up the layers of colour as you go.Its a very different technique to normal watercolour as you cover just about the whole sheet with each layer..and it can be a bit confusing till you get your head around it. The painting Ive done is inspired by the real plant thatI have growing in my garden, but it's not an exact copy of the colours or shapes. My aim is more to show the movement and energy of the plant, not to create a perfect realistic copy the way traditional botanical art does.  Layer One You start off by covering the paper with water, so that you avoid any hard lines and the colours can move and
Post a Comment
Read more 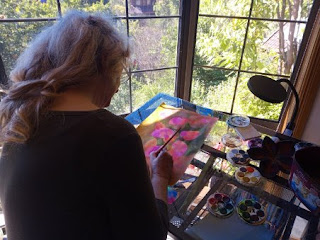 Ive been fiddling with my website this morning, trying to make it a better reflection of who I am... and it's been quite challenging.... I just do too many things.... I have been told so many times by advertising and marketing people that I need to develop a clear brand..but I keep on hopping around changing what I do, playing around with new techniques and skills and developing new kinds of art work... And I'm buggered if I know how to succinctly market myself on one website. My workshop at home is like that: I have shelves full of gear for such a variety of different art forms, clay supplies, every kind of paint you could imagine, beads, felting wool, goddess knows how many paints and inks...and then theres the perfumery...boxes and boxes of oils and extracts, bottles, cards and packaging materials.... Last time I moved was a nightmare...packing up the house was bad enough, but the studio....oh my.  I am:  A visual artist .....who paints in watercolour, acrylic and ink....in
Post a Comment
Read more

Energy Work The Basics it all starts from the basic assumption that everything is made of energy our bodies, the world around us.  We have all grown up with the concepts of energy “discovered” by modern science. of electricity, magnetic energy, gravity, weight, atomic radiation...                 But the concept of energy on a subtler level is still seen as a mystical, imaginary spiritual thing played with by deluded mystics who like to believe in fairy tales. We do have a spiritual subculture seperate from science that has made many attempts to define other energies.  Starting in India Sanscrit, and Bhuddist teachings, we have the concept of Auras and energy bodies, chakras and more. Which is wonderful, as it has made the concept more mainstream and acceptable to people, but one of the misconceptions that exists is that this “Aura” is somehow something seperate and “spiritual” from our more earthy bodies. Whereas in actual fact, our bodies themselves are energy.
2 comments
Read more
More posts