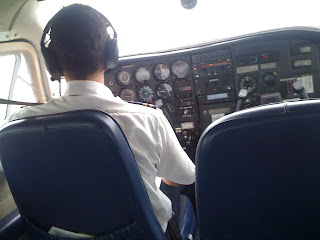 Well, so far it's just been weird and unpredictable. Which I guess is how adventures are supposed to be.
After the fiasco with NT health and the 3 changes to where I was actually going, I finally boarded a plane that they had leased just to fly me up to Lake Nash. I felt really special! Normally you see they only do things like that for doctors...but it seems there simply was no other way to get me there...
So instead of the usual large airport with all the security I am used to, I got a taxi to a private hangar with a miniature waiting room and free tea and coffee instead of expensive shops.
I was introduced personally to “my” pilot, a sweet young dark haired lad, who looked barely old enough to hold a licence.
We clambered aboard the tiny little plane, with just a bit more room than your average landcruiser,
and he began to go through the checklist, double checking everything with procedure book and fiddling with his instruments.
When he got the green light over his high tech earphones (which were sparkling new and a bit at odds to the rest of the slightly worn and elderly looking plane), he carefully drove out to the take off strip and we were off!
We took off smoothly, and rose slowly up to just below the high cloud level..and to my relief I found that the height didn't bother me any more than it does in larger aircrafts. I had been a bit worried about that, being the type who will normally avoid roller coasters and anything where I dost personally have control over the brake pedals like the plague.) 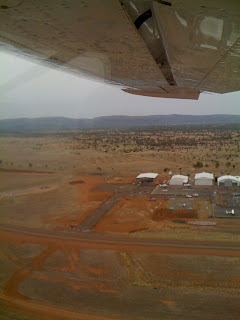 It was breathtakingly beautiful. Even if it was unusually cloudy for the Northern Territory. My pet pilot however seemed a tad worried. He fiddled endlessly with knobs and buttons, and finally tried to set up a portable GPS looking thing on the dashboard...only to take it down and fiddle with it's buttons to, with hands that seemed to be shaking just a tad. I gulped, and tried not to twitch too much when another of his bouts of fiddling left the plane tilting off to one side a bit before he realised and jerked it back straight. And I couldn't decide if I felt better or worse when he eventually pulled out his iphone and set it up on the dashboard instead...
But realistically, there wasn't a damm thing I could do at this stage except hope that the kid would be able to find his way there, and control the plane with whatever instruments were working, so I took a deep breath, chanted a few comforting mantras and made myself look out the window and go back to enjoying the amazing view. And it worked. For the next 15 minutes I was in heaven...literally I suppose, grin.
And then I began to notice a little twinge in my bladder. 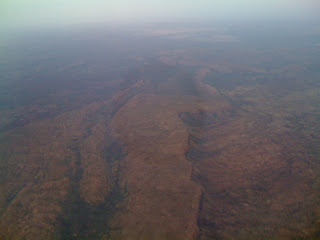 Now last time I picked up someone from one of these little airplanes, they got off ad rushed past me to the bushes, and I remember being rather amused at their urgency at the time. But I was beginning to realise that the vibration of these little planes has a rather, er, irritating effect on certain parts of ones anatomy.
Over the next 15 minutes I went from trying to ignore the fidgeting pilot to trying to ignore my bladder. The beautiful landscape looked less and less exciting, and I finally pulled out me brand new ultrabook computer to try and distract my brain from the pressure on that tiny muscle at the exit of my bladder by playing plants ans zombies. And it worked. For about 10 minutes.
And I began to realise that I was in serious trouble. I looked at the clock and realised we still had at least another hour ahead of us, and that was assuming that the kid pilots iphone navigtion actually did the trick! 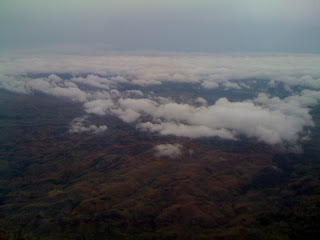 I started to get flashbacks to the time I struggled walking home from primary school in England, trying desperately to hold on until I got home. And the miserable feeling of losing the battle for control just before I got there. Was history going to repeat itself? Was my first intro to this community going to be one of the worst acts of abject embarrassment in my adult life?
I started to look around the cockpit and seriously consider whether I could use the little esky full of nifty water bottles...
The next 40 minutes gave me ample time to fully explore how much mind control my various meditation and yoga practices have taught me over the years. Personally, I think child birth was less challenging.
And when we finally came to the beautiful little town in the middle of nowhere, all I could think was how quick was this bloody thing going to get down? (Om mane Padme Hum...the body is just an illusion...)
As soon as the plane stopped, I burst out of the door and took off down the runway looking for anything that even vaguely resembled a tree to hide behind, pausing only briefly to yell out what I was up to to the surprised nurse in the troopy who had come to pick me up.