January 29, 2013
After a bare week or so at home, I'm back in the Outback again, this time purely because I need the money. Ongoing renovations in the hope of making my house into something i can either sell or rent out is proving to be more than my basic nurses salary can cover...but this time I am struggling to dig out my happy sense of adventure.
There is a deep loneliness in traveling and working as a single woman..esp one in her mid 40's. Wherever you go you are surrounded by married couples and young single people who are the same age as your kids. And it's beginning to get to me.
Anyway, back to the journey itself.
It all started this time with a night in a hotel in Sydney. You see the nursing agency's travel booking people had decided that a flight to Brisbane at 6 in the morning was a good idea. now add to that needing to be there an hour before take off and a 1.5 hour train journey from home to the airport, and I would have had to get up at 3.30. And since I was to start work the next day, they gave in and put me up in an airport hotel the night before.
As it was I couldn't sleep. There's something about being in a lonely hotel room surrounded by strange noises of hundreds of other people that is truly demoralizing. And I began to understand why so many men who travel for a living use hookers. The idea of being able to pick up a phone and organize myself some warm bodied adult company sounded pretty bloody good at 1 in the morning, but even though there are male hookers to be had by the modern day woman, what I really wanted was a broad caring shoulder to snuggle up to and sob for a bit, and I don't think you can rent that at a brothel yet, sigh...This being single thing is really beginning to get to me.
Anyway, the next (or really later that) morning, I dragged myself out of bed and took a cab to the airport. Only to discover that my flight had been cancelled due to the weather. (little things like a cyclone and large areas of the country flooding ya know!)
So I sat around drinking coffee, discarded an inedible breakfast of microwaved scrambled eggs and bacon after 2 mouthfuls and finally got on another plane an hour and a half later. I sat next to an eastern looking young gentleman, who seemed incredibly shy. He spent all of the trip immersed in some religious text printed in both eglish and what looked to me like jewish script and seemed terrilby embarrassed that his somewhat larger bulk kept us in physical contact throughout the flight. So I didn't attempt any friendly conversation and instead immersed myself in a tv doco about american jails. Very uplifting. Americas finest beautiful strong young men, mostly black, all wasted warriors fighting battles on the street. What a heartbreaking waste of youth and energy!
In Brisbane I discovered that my next plane was seriously delayed (again due to the little weather disturbance) and that those 2 mouthfuls of questionable breakfast had been too many. So I made acquaintance with all the toilets in the airport and drank more coffee. And discovered that my travel partner of the last leg was waiting for the same plane! 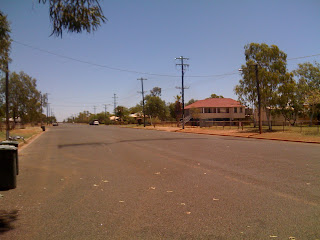 Eventually some two hours later we took off in a smallish plane that looked way to delicate to battle the dark clouds, driving rain and impressive winds that were bending poles on the runway. We took off shakily and proceeded to battle our way up above the clouds while I clutched onto the paper vomit bag wondering if I was going to have to use it for the first time in my over 40 years of flying!     The weather grew warmer and sunnier as we flew further west, and after a few stopover landings, we reached Quilpie itself. It looked very much like the other desert towns Ive been to, though it seemed..tidier from the air. It's a white town this time. Cattle country it seems, though how they survive out here in the bleak dust amongst dry wattles and gums is a mystery to me! There was no one to pick me up, but the lass who runs the airport was happy to give me and the young lad from the earlier flight, who it turns out is to be the relief chemist here for the next week or so, a lift to our respective abodes. The poor lad could barely raise his voice enough for us to get this information out of him, and he wouldn't look either of us in the eye...and I wonder how in hell he's going to deal with the typical outspoken ozzie outback locals! And what in the world is driving such a shy fellow to come all this way out here on his own?
So far it's just...quiet. I went for a walk yesterday to get some groceries. 3 streets away in the 40 plus heat, saw the shops, all 2 and a half of them, and bypassed the one cafe that I had already been warned was a bit "Iffy" The hospital is...quiet. small, neat, friendly enough, with a constant staff of casuals to tread on the toes of the permanents who have all grown up here...
It's a neat tidy town full of wide empty streets, locals that all stare and say G'day! and endless dry scratchy lawns irrigated with high overhead sprinklers. Turns out these are used because the bore water that supplies the town comes out boiling hot and would burn the greenery unless it is airated to cool it a bit first! The nurses accommodation is a 5 bedroom house next to the hospital where we tiptoe around each other as at least one person is always on nightshift! It's nice enough, with back verandah looking onto the bush and the more palatial individual houses for the doctors, and there's an elderly excersise bike in the living room that I am planning to make use of to rouse my ageing body out of it's slow decline into unfittness and an emerging potbelly! So far I've managed 10 minutes. But one of the other nurses is coming to take me to the local tennis court when it cools off  a bit, so I'll get to see if I can still hit a ball over the net after, er, 30 years? I've only got my hiking boots and a pair of green army shorts, so no classy whites, grin! Shoul
d be at least amusing.....
austalia cows nurses Nursing outback Australia outback nursing qld quilpie