Well, nursing up here in the Torres Straight has been educational. The job itself involves the usual looking after patients on the ward, about 2 thirds of which are nursing home pt's awaiting placement, interspersed by the occasional harrowing time of interest when something interesting wanders into the tiny ED.
There's a whole host of really interesting nurses here, mainly ED and theatre specialists who are all annoyed and disgusted at having to spend most of their shifts doing showers and moving patients in lifters, after being told by their agencies that the job was in their speciality. But realistically, in any setting like this you do need to have skilled people on hand for when the shit hits the fan. But they also need to staff the ward the rest of the time.
The range of experience the travelling nurses bring with them is pretty impressive. I've met Brian, who works for doctors without borders most of the time, and is here to top up his coffers as MSF doesn't pay enough, being a volunteer organization. Chitra, a theatre nurse who like many of the others has a masters degree and has worked as a lecturer, and others with qualifications coming out of their ears.
What it means is that generally, you get better nursing care in these strange of the beaten track places, simply because you are looked after by super experienced staff.
And the same goes for the doctors. I helped with a really scary intubation on a big islander bloke with a possible neck injury the other day and was truly impressed with the fact that the doc managed it at all...and also the minimum of fuss and panic that the rest of the team displayed throughout. The patient was seriously lucky...
It's also the usual hotbed of intrigue, political power play and bullying, which I'm doing my damnedest to ignore, with varying success.

The locals are really lovely. Big, friendly people who all seem happy, confident, well fed and healthy which is a huge change to the shy and suspicious Desert people I’ve worked with over the last two years. The health problems up here are usually more typical first world things, plus a few tropical specialities.
The islanders seem quite prosperous, well dressed and clean (which will make sense to anyone who has worked in the outback!)
I've counted 5 churches on the island so far: Catholic, Protestant, 7th Day Adventists, Assembly of God, the Mormons and Ba'hai. They do religion pretty seriously and I've had the bible quoted at me by a few patients.
Luckily they seem to have kept it all well mixed with local traditions, and weddings and funerals are bright loud colourful affairs with huge amounts of food and dancing.
The local graveyard is fascinating, with a hauntingly beautiful old Japanese section as a counterset to the brightly painted Islander tombstones with photos and masses of plastic flowers... 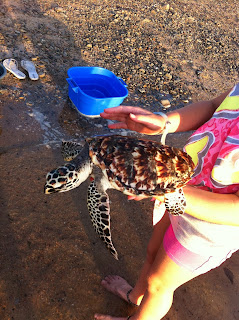 The island itself isn't really what you’d expect from a tropical island. It's mostly dry scrub bushland with nary a palm or banana to be seen. And the hibiscus and frangipanis in town look as though they are barely holding on and dropping their small stunted flowers off almost leafless trees.
The hospital itself is right on the water so the views from the pt windows and the verandah where I have morning tea seem totally unreal.
Most evening I wander over to the beach across the road and pat the pet turtles one family brings down to swim in the shallows...I've been assured by the locals that the crocs all hang around on the other side of the island where the dugongs and turtles are butchered, and so far they seem to be right. Wading barefoot is a tad daunting with all the stories about stonefish and Iragangi jelly fish, but it's just soooooo cool and nice and relaxing after a long day of showers, intrigue and arguing with strange ventilators.....And the sunsets....
agency nursing Nursing remote nursing TI torres straight tropical nursing