May 12, 2016
Back in the outback to work as a remote area nurse....This time in Papunya Central Australia.
Due to the usual communication fuck up between the agency and the clinics, I've ended up being driven out on a friday morning, to do a few hours of orientation tot he new clinic and then sit in my little 1950's broken motel style flat behind the barbed wire fence twiddling my thumbs for the weekend.
It started the usual way. The agency rang me and asked if I'd be willing to go out to Mt Liebig to work for 10 days, to replace one of the RAN's who needed to come into town for a courtcase.
So I said, yeah sure!
Cool, the agency rep said, I'll just send you a little bit of paI spent the next 2 days filling out this paperwork. And packing. Including 2 big boxes of staples and two freezer bags full of meat and fruit and veges.
And 12 large bottles of filtered water.
The food because though each community has a small local shop, the range available and the prices are...well, pretty bloody ridiculous.
Frozen pies, lots of cans at twice the normal price, and a smattering of “fresh” fruit and veges at prices that make your eyes water.
And the water is because no one can drink the bore water available through the taps. Well, you can drink it, but as my boyfriends daughter put it so well “You can drink as much as you like, but you still feel thirsty!”. Outback bore water has such a high salt content that it almost feels thick. Kettles give up their ghost after a few months and the inside of pipes is just a scary clogged up white caulky mess.
So my box of filtered water is very precious.
The Aboriginal people drink a lot of soft drinks, which we nurses are constantly being told to nag them about, high levels of diabetes and all...but the real reason people drink soda is because the water is just...awful.
Anyway, Thursday morning I was organised and ready sitting there dressed with all my food, paperwork copies in a neat bundle, laptop, phone, chargers and Id even managed to remember my hat at 7 in the morning, ready for an 8 o'clock pick up.
And I waited. And waited. And finally rang the agency to find out wtf was going on. After a few phone calls back and forth, it turns out they had booked the driver for the wrong day.
Which means that I missed out on a whole days pay. And potentially would get to sit around all weekend with nothing to do (and no pay for that either).
I ended up ringing Mt Liebig to see if they had anyone driving out there today I could cadge a lift with...they didn't, but the manager on the other end of the phone was delighted I was coming, a male nurse (which I have found usually means far less politics and potential drama in a remote setting) and also more than happy for me to do the on call shifts on the weekend! So that was a plus anyway....
Then later that afternoon, I find an email from the agency saying that they don't need me to go to Mt Liebig after all, as the court case has been cancelled. However they need another nurse in Papunya, the neighbouring community so it will be the same day with the same driver.
Sigh.
On friday morning, I get picked up a delightful female driver, Carol Anne, who turns out to be one of the original Remote Area Nurses first working on the communities in the 50's! She retired about 10 years ago, and I'm not sure whether she's working as a driver, or because she misses the people!
Either way I'm delighted I get to spend 3 hours in the car with her listening to her stories!
She is such a treasure trove of knowledge...and I learn so much about the people, the various tribes and also the challenges she and her colleagues faced nursing on those days. And boy do I take my hat off to her.
I'm tempted to see if I can track her down and do a more in depth interview with her some time! 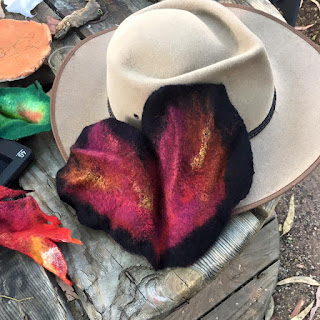 Yesterday was my 50th birthday... And it was pretty bad, (My facebook page doesn't have my real birthdate on it, in case your wondering why you didn't see it....) Its such a weird thing this facebook...millions of people reaching out to connect and posting about their daily lives to do so...yet what we share is such a filtered edited version of what we really feel and think. Happy bright photos of accomplishments, anniversary presents from caring spouses, clever things our kids have done and for the main part, the only dark bits we share are of wars in Syria and political disasters. Pain a few times removed from the personal. Facebook, the ultimate social network, is ironically full of clever memes about the importance of learning to love yourself and your own company.  And personally, I think it's a crock of shit. I've been posting about my wonderful adventures as a traveling perfumer and artist for months...and it dawned on my last night that I've
Read more

May 12, 2016
Like many women, I have children to two different men. And I have dated and been in relationships with men who have children with previous partners. It seems to be the modern pattern, and the older we get, the more you can pretty much guarantee that blended families are going to be part of any dating scenario, with all the potential pittfalls and challenges that brings. One of the pittfalls is that, in Australia, the men get screwed in the scenarios. Its one of the few areas in our misogynistic society that seems to be totally rigged towards the mothers. Yes, I hear many you out there crying out about deadbeat Dads who don't pay child support or spend any time with their children. But there is a whole side to the story. And a whole group of caring loyal men who really love their kids and want to be part of their lives. I've seen it happen to two of my partners now, as well as to other close male friends. All of these guys are basically decent, caring human beings. An
Read more